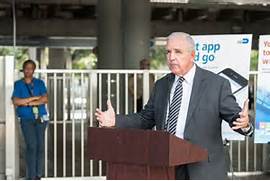 Miami-Dade Mayor Carlos Gimenez doesn’t hold grudges. Five years ago, I endorsed his opponent, Julio Robaina. But Gimenez and his staff never held it against me. If I asked him to address inner-city issues, he and his staff followed through. And he’s listening to my ideas and suggestions on how we can make Miami-Dade a place where all people, young and old, regardless of color, can succeed.

On Election Day, Gimenez will face Raquel Regalado, a county school board member and daughter of Miami Mayor Tomás Regalado.

Gimenez has earned the support of Miami’s black community and millennial voters who backed me when I ran for mayor in 2011. He’s made youth gun violence his number one priority. He’s moved forward with the redevelopment of the Liberty Square public housing complex. And he promoted Juan Perez, an honest, transparent cop who works very hard with African-American activists and families, to Miami-Dade Police director. The mayor also brought in Russell Benford, a black administrator, as Perez’s deputy. He’s no “token” hire, as Raquel Regalado described him in a radio debate.

During a recent conversation, Gimenez told me he’s willing to look into why grassroots black organizations are largely ignored by the county’s Children’s Trust. Neighborhoods such as Liberty City, Overtown, Richmond Heights, and Opa-locka desperately need after-school programs where parents can send their children for tutoring and other services, such as counseling in the aftermath of gun violence.

Gimenez is also receptive to my vision of turning Opa-locka airport into a small hub for economy airlines, with soul-food restaurants and minority-owned shops that cater to budget travelers, who are predominantly people of color. I also told him that the county can even convert some of the hangars into sound stages and studios for Miami’s film and music recording industries so that Millennials have jobs at home and don’t have to leave for New York City or Los Angeles. If he can get America’s largest mall built in Northwest Miami-Dade, Gimenez can make it happen for the Opa-locka airport.

A recent WLRN/Univision poll of 600 local voters shows Gimenez has a 22-point lead — including a significant advantage among black voters and Millennials. That’s good for Miami.

So black Miami should vote for Gimenez. I will.