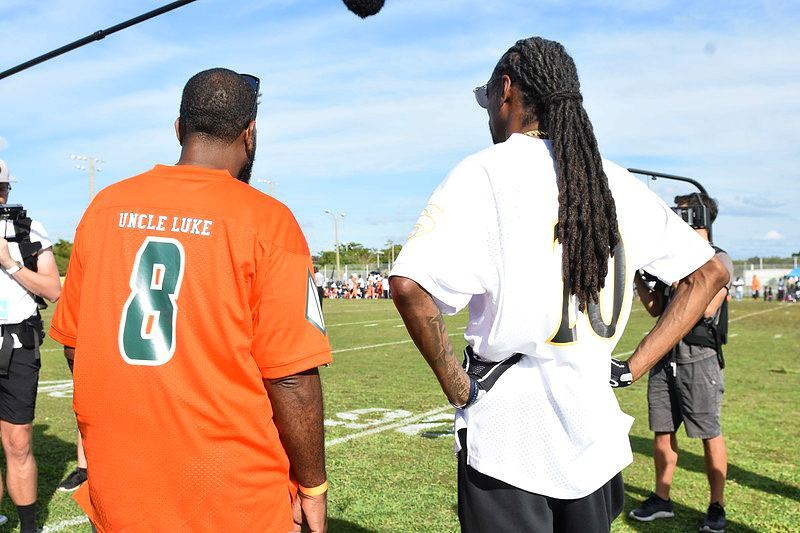 Back in the Nineties during my heyday as a rap impresario, Snoop Dogg and I didn’t like each other very much. In fact, we had our own East coast versus West coast rivalry going on. Snoop and Dr. Dre dropped a diss about me on the track Fuck wit Dre Day and I responded with a song called, Cowards in Compton get Sprayed in Dade.

The beef got serious at the 1993 Jack the Rapper convention in Atlanta when friends from my crew got into a bloody brawl with members of the Death Row Records entourage. Fast forward 25 years later, there’s no more bad blood. In fact, Snoop and I are on the same page when it comes to helping the youth in the neighborhoods we come from.

In 2005, the Long Beach, California native launched the Snoop Youth Football League that takes in approximately 1,300 kids from the Los Angeles area.  For more than 25 years, I’ve run the Liberty City Optimist Club, providing a safe place for children from the neighborhood I grew up in to play sports, get tutoring and prepare them for life as productive members of society.

Last year, Adidas brought us together for a home-and-away series between Snoop’s league and the Liberty City Warriors. Snoop and his kids flew down to Miami and we put on an exhibition game at Charles Hadley Park. On Friday, the warriors, long with coaches and family members fly out to Southern California for the rematch.

This is a great opportunity for the kids in the opyimist club program. About 95 percent of them have never been on an airplane, let alone traveled more than 3,000 miles cross-country.  When I was a kid, I never imagined New York and Atlanta were real places because I only saw the cities on television. The children are going to meet boys and girls who they can relate to. Maybe they will even form new friendships that could last their entire lives. Plus, they get to meet Snoop Dogg and other hip-hop celebrities.

The goal is always the same: Inspire the kids to do the right thing in life. At the same time, the adults who volunteer for Liberty City Optimist hope and pray that the ones who don’t make it to the NFL don’t do the wrong things in life. While there are many success stories, some kids fall through the cracks. They end up on the streets or in prison, if not dead before they reach full adulthood.

We want to show them the world is an open book they can write. We want to get them out of their environment and see what life is like outside Miami. These kids face a sad reality. It wouldn’t surprise me if some of the parents and coaches get a call over the weekend about someone in the neighborhood being shot and killed.

And by linking up with Snoop, we teach the kids that all that beefing is nothing but bullshit.