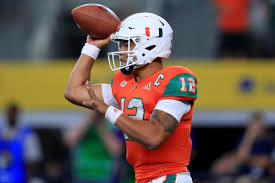 Is Malik Rosier the Real Problem

Miami Hurricanes fans and sports pundits are still walking around in a daze following the team’s embarrasing loss to the Louisiana State Tigers over Labor Day Weekend. They bought into the hype Miami deserved a top 10 ranking while ignoring the brutal reality. The same problems the Canes had during the three game losing skid to end last season were exposed by LSU.

Even if the Hurricanes somehow win the ACC’s coastal division again, Miami is nowhere ready to beat the Clemson Tigers, the national powerhouse that destroyed the Hurricanes in last year’s ACC title game 38-3. That’s on the coaching staff.

Putting aside the turnover chain mania, defensive coordinator Manny Diaz’s inability to make gametime adjustments puts his players in the worst positions. That was evident when LSU’s quarterback Joe Burrow called an audible that resulted in running back Nick Brosette’s first quarter 50-yard touchdown. The defense was lined up wrong for most of the game.

On the offensive side, Canes nation is piling on quarterback Malik Rosier, who had another awful performance, missing wide open recievers and throwing two interceptions. Now, Rosier definitely acts like a guy on a cofee break when he throws the ball to the other team. He also lacks passion, playing like a rich kid who doesn’t need football to feed his family. Meanwhile, his receivers are playing like their lives depend on it. They are hungry.

But head coach Mark Richt, who also runs the offense and calls the plays, deserves the blame. None of the local sports talk hosts and Canes beat writers like Joe Rose and Will Manso want to criticize him because it’s still the honeymoon period. Obviously Richt believed Rosier was the best guy to run his offense even if the senior is not the best quarterback on the team. Richt also makes questionable decisions such as waiting to throw more passes to star receiever Jeff Thomas until the Hurricanes were down by 30.

When Richt was coaching at Georgia, he let his offensive coordinator, Mike Bobbo, call the plays. With the coordinator’s input, the head coach makes the decision as to who starts at quarterback. Since Richt wears both hats and his son is the quarterback’s coach, it was a family decision to start Rosier. They felt he could do the job of taking the U back to the Promised Land. Obviously, they made a bad decision.

The frustration is boiling over in the locker room. According to Caneshades Radio, Richt benched wide receiver Ahmmon Richards called out Rosier during halftime of the LSU game. Officially, the team said he injured his knee. However, sources say the team wants to see Richt give redshirt freshman K-Nosi Perry a shot at the starting spot.

But Richt is sticking with Rosier as the starter. If he changes quarterbacks that will essentially put him on the clock and the honeymoon will be officially over. With a new quarterback, the blame will fall squarely on Richt because if he’s calling the same plays and the offense contnues to struggle it will show his inability to call plays.

While Richt has done great improving the U’s recruiting classes, he is now iun his third season. That means his first recruiting class are now juniors. But Richt has yet to prove he can win the big games. With 17 returning starters, there is no reason the Canes aren’t ready to compete for the national championship