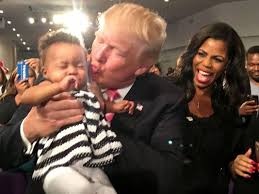 Omarosa Manigault-Newman is on her redemption tour, promoting her tell-all book, Unhinged, about her days saddling up with her former reality TV show boss, Donald Trump, during his 2016 presidential run until her unceremonious firing in December of last year. In her tome and in TV media interviews, Omarosa is confirming what every minority with any common sense already knows: Trump is a bonafide racist.

Thanks Omarosa, but we already picked up on that when Trump called Mexicans murderers and rapists when he announced he was running for president. In fact, he’s used just about every code word to degrade brown and black people on Twitter just so he can stir up his bigoted white nationalist base of his. He called Lebron James and Don Lemon Dumb, and that Congresswoman Maxine Waters has a low IQ.  He referred to African American supporters at his rallies as “my blacks.” And he described Neo-Nazis and Pro-Confederate racists as “fine people.” Now Trump is using the same gas-lighting language to go after Omarosa, calling her a low-life and a dog in a barrage of Twitter rants the last couple of days.

However, Omarosa is not about to become the face of the Black Lives Matter movement. She will never be accepted back in the black community for standing up for Trump as he attacked NFL athletes protesting during the national anthem and implemented racist policies that hurt all minorities. Omarosa is like Sheba, the female slave character in Django Unchained who “comforts” plantation owner Calvin Candie and gets to live inside the big white house. As white man’s sex toy, Sheba defends her massa at any cost until the freed slaves come for their revenge.

The only good thing is that Omarosa has audio tapes that will confirm what a pathological liar Trump is. She already got him after he tweeted Monday that he has never used the word “nigger” in his life, refuting a claim in her book that there is a video recording of him saying it. Omarosa followed up by leaking a tape to CBS News of her and two other Uncle Tom black political advisors discussing how to handle the fallout of the “N-word” video leaking to the media.

Yet, the audio also proves Omarosa was willing to stick with Trump. I’d say Omarosa is a disgrace to black women, but she has never really been an African American.