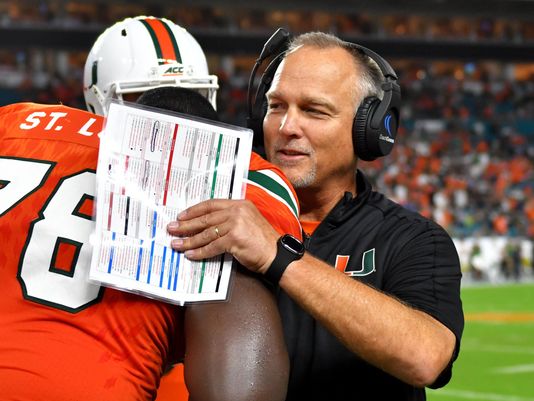 The State of the University of Miami football

These are tough days for the University of Miami football program. After beginning the season ranked in the top 10 and supposedly ready to compete again for national title, the Hurricanes ended with a disappointing 7-5 record that included the third four-game losing streak of Head Coach Mark Richt’s tenure. It seems last year’s magical 10-win season is starting to look like a fluke.
Meanwhile, off the field, there are more signs of turmoil. Richt dismissed the team’s best offensive player, wide receiver Jeff Thomas and his nephew, Max Johnson, a four-star high school quarterback, recently declared he was going to Louisiana State University. You know the problems are serious when your own relative doesn’t want to play for you.
Richt is still one of the best college football coaches and recruiters, but he refuses to see that he cannot run a successful offense by himself. The jury is still out as to whether Richt will hire an offensive coordinator so it seems he is just as stubborn as the guy he replaced. Al Golden’s unwillingness to fire his best friend Mark D’Onfrio as defensive coordinator led to his dismissal as the Canes head coach. Richt doesn’t want to relinquish control of the offense.
Yet, the offense regressed this season. And Richt has done a terrible job developing quarterbacks wearing orange and green, including Brad Kaaya, the Canes all-time passer who skipped his senior year to enter the 2017 NFL draft after playing for Mark for one season. That means he needs to replace his son, Jon Richt, as quarterbacks coach. If Richt refuses to bring in an offensive guru, it could also impact the defense.
Defensive coordinator Manny Diaz Jr. has delivered by making the Canes D one of the most ferocious in the nation. Diaz, a smart, savvy guy just like his father and former Miami Mayor Manny Diaz, is not gonna stick around for Richt to screw up another promising season. Diaz should go ask Richt are you getting an offensive coordinator and if the answer is no, he will start looking for a head coaching job. He is not going to get hired as a head coach if he ends up getting fired with the entire Canes coaching staff after another season of four consecutive losses and no shot at the national championship.
Richt needs to make a bold move so the assistant coaches, returning players and recruits believe he’s committed to making the U great on both sides of the ball. He should go steal University of Houston offensive coordinator/associate head coach Kendal Briles and Florida Atlantic University quarterbacks coach Chris Perkins, who is South Florida’s number one quarterback whisperer.
Briles turned the Cougars into an offensive powerhouse his first year on the job. Houston was ranked fourth in scoring and seventh in total offense in the nation. In one year, he helped Houston get into its conference championship. Briles did the same thing during the one year he was at FAU. Sources say Briles would take the U job in a heart beat.
If not, Richt may just end up losing his job to Lane Kiffen, the young brash FAU head coach whose hungry to run a elite college program like the U. Kiffen would even take a pay cut.
Follow me on Twitter UncleLukereal1 and Instagram
Share: